WHAT I LEARNED FROM RE-WRITING MY NOVELS

What I Learned from Rewriting my Novels 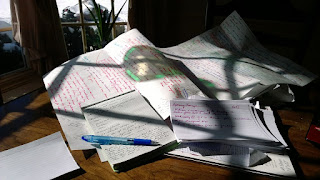 Writing a novel is a learning process. Rewriting one, even more so. Whenever I am working on a rewrite, I get mad at my earlier self for not being more careful with continuity and pacing. "What idiot wrote this gobbledygook anyway?" I shout to the heavens. Oh yeahit was me.

I've been through the writing/rewriting cycle a few times now: for two, as yet, unpublished novels, for Going Through the Change, a novel which is being published right now, as I write this (Release date: April 23, 2015 from Curiosity Quills Press), and for a fourth book (a sequel to Change) that I'm working on right now.

Here's what I have learned in all of this work:

1. Each novel is its own specific puzzle. You can't put this one together the same way you did another.

I felt like I learned so much from writing and rewriting my first novel, His Other Mother (unpublished). For example: how to structure a novel that featured a lot of internal conflict in such a way that the reader is still engaged. Or how to stick really well to the point of view in a particular chapter without accidentally slipping into another character's head.

But that wasn't the be-all-and-end-all. In reworking Change, I had a different kind of puzzle to solve. Much of the conflict was external. There were physical fight scenes in which logistics had to be clear, but I still had to maintain the emotion and excitement of the fight. Nothing I'd written in that first novel helped with new problems.

2. When you write with the end in sight, the first draft holds together better.

If you missed my writing & marketing tweets and retweets yesterday, here they are again:
Happy running and writing, Kathy