Social networks have become the go-to promotional platform for authors. Because of their immediacy, size, and international reach, what once might have required weeks, months, or years of globetrotting and a large financial investment now can be accomplished in minutes, hours, or days for free. Networks like Facebook, Twitter, tumblr, Google+, and Pinterest offer authors unprecedented marketing muscle.

They also offer enormous potential for tripping over best intentions, falling on your face, and breaking your nose in a very public forum.

Here are some tips for making your social media presence more boon than bust.

Pick your favorites.
Regardless what anyone tells you, no one needs to maintain a presence on every social network. In fact, belonging to too many not only can rob you of time and mental energy, but also may be counterproductive. Establishing and maintaining a social media presence requires consistency and creativity. Consistency and creativity are much easier when the effort is fun. Focus on the two to four networks you enjoy, and not only will your interaction be more pleasant, but you’ll also avoid the need to come up with different ways to express the same thought. One of the biggest mistakes many authors make is posting the same message with the same graphics and/or links to every network and every subgroup within the networks. People tune out what they see repeated too many times.

Be yourself.
In the digital age, readers want to interact with real people, not cardboard automatons. Real people have strengths and flaws. Don’t be afraid to let both show—in moderation. Nobody likes a whiner and most people are uncomfortable when others share information that is too personal, so refrain from both behaviors. In addition, all of us have multiple personalities, depending on the situation in which we find ourselves. Be brainy, be clueless, be the class clown, or pick another aspect among the many that make you unique. Once you’ve decided which persona is more “you” and will be the easiest to maintain over the long haul, do your best to present that personality in all of your social media interactions. The occasional departure is unavoidable, but changing your spots too often will keep people off-balance—and consequently, at a distance.

Interact with others.
Social networks are social environments. Talk with your contacts, not at them. Think of social networks as gigantic, online cocktail parties. What do people do at cocktail parties? They wander around with a drink in their hand, politely joining conversations already in progress or starting their own. They share interesting news, tell jokes, and generally try to play well with others. If you start a discussion, stick with it, but don’t attempt to monopolize any conversation regardless who started it. Always thank people who do you a kindness by sharing your posts.

One big caveat: Unless you want to start or join a brawl, avoid the temptation to discuss politics and religion. Remember that at least half the people online disagree with your position. At best, they’ll consider you clueless, a dangerous radical, or a complete loon. If you can’t avoid a hot-button topic, approach it with sensitivity and be prepared to keep an open mind about opposing viewpoints. As for social network trolls who can turn any innocuous discussion into a political tirade or a religious screed? Ignore them, and they’ll go away. If they don’t—particularly if they harass or threaten you or others in the discussion—block the troll, delete his or her posts from your threads, and report the philistine to the digital authorities. Most social networks are unwilling to risk accusations of censorship by clamping down on belligerent denizens whose behavior in unlikely to have real-world repercussions, but they take overt threats and bullying very seriously.

Give contacts something of value.
If you appear infrequently, especially if all of your appearances contain a marketing message, others on the network will ignore you, at best. At worst, some will report you as a spammer, which puts your social media account at risk of closure. The best marketing messages are those that seem to be anything but a sales pitch. Tell jokes, share links or memes or trivia, post beautiful or funny images or quotes, ask questions, solicit assistance, or do any of the other things you find intriguing when others do them. Slip in a plug for what you’re selling no more often than once every ten or so posts, and try to make the pitch relevant in some way: “Did you know the word ‘gunslinger’ was invented by Hollywood in the mid-20th Century? I didn’t until I started researching the background for my latest book, Prodigal Gun. In the Old West, men who made a living with their guns were called gunmen, gunsmen, pistoleros, pistoleers, and shootists. What other words besides ‘gunslinger’ have y’all heard or read?” Instead of anchoring the post with a link to whatever you’re trying to sell, drop the link into the discussion later on.

The Golden Rule applies online, too.
Too many social media marketers forget their manners in the digital world. Rude behaviors to avoid include responding to “let’s connect” invitations with a public or private message about your product, website, or other social media presences; posting sales pitches in someone else’s space, and dropping links to your product or website into a discussion someone else started. All of those are great ways to convince folks you’re a sales vulture. Nobody enjoys being seen as nothing more than a dollar sign. Treat others the way you’d like to be treated.

No author is an island.
Word of mouth sells more products than any advertising or marketing message ever will. With luck and good storytelling, many authors develop fans who recommend books to their friends. Another resource for word-of-mouth marketing is other authors. Cross-promote with those you respect and whose work you enjoy. Be sincere about anything you recommend, though. You’re likely to be called out if you recommend books you haven’t read or if the books you recommend conflict with your fans’ expectations. Readers recognize shameless shills from a mile away.

Be selective, be courteous, and be yourself, and you can turn a marketing medium into a playground that’s remarkably effective.

And now, a word from our sponsor… 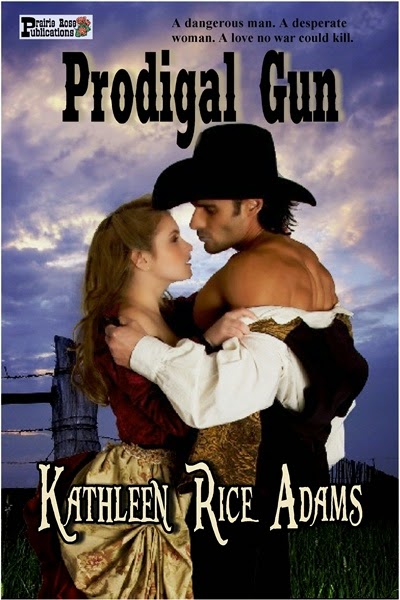 Prodigal Gun, the novel I mentioned above as an example of giving social media contacts something besides an overt sales pitch, debuted November 20. The hero makes his living with his guns. Other than “mean as a rattlesnake and looking for someone to bite,” what might his contemporaries have called him?

To honor the memory of my late other half, all royalties earned by this book will be donated to charity in his name.

A dangerous man. A desperate woman. A love no war could kill.

Widowed rancher Jessie Caine buried her heart with the childhood sweetheart Yankees killed on a distant battlefield. Sixteen years later, as a Texas range war looms and hired guns arrive to pursue a wealthy carpetbagger’s agenda, Jessie discovers the only man she ever loved isn’t dead.

At least not yet.

Embittered by a brother’s betrayal, notorious gunman Calhoun is a dangerous man, come home to do an unsavory job. A bushwhacker’s bullet nearly takes his life on Jessie’s land, trapping him in a standoff between the past he tried to bury and the infamy he never will. One taste of the only woman he ever loved puts more than his life and her ranch in the crossfire.

With a price on his head, a debt to a wealthy employer around his neck, and a defiant woman tugging at his heart, Calhoun’s guns may not be enough to keep him from the grave. Caught between his enemies and hers, Jessie faces an agonizing choice: Which of her dreams will die?

Available in paperback and ebook at:
Amazon Barnes & Noble Smashwords