Continuing with another post on editing, I found this last night and immediately started through my manuscript. I found dozens of thought words. It’s a struggle to rewrite the sentences, but doing so, definitely improves them. Try it!

Craft: Maybe It’s Not the Thought That Counts
By: Chuck Palahniuk

From this point forward—at least for the next half year—you may not use “thought” verbs. These include: Thinks, Knows, Understands, Realizes, Believes, Wants, Remembers, Imagines, Desires, and a hundred others you love to use. The list should also include: Loves and Hates.

That’s Chuck Palahniuk with the kind of writing-craft concept that can make others seem fairly lame. But only when he gets into the examples he offers in his Tumblr post, Thought Verbs. Initially, this sounds like deploying active rather than passive verbs, right? That, by the way, is great advice, and is and have come under their own, brief scrutiny in this write. But there’s more to what Palahniuk is suggesting than that. Here’s an example of what he’s saying:

Here's a page from my manuscript The Last MacKlenna. The sentences with the word "remember" are listed in the left hand column. There are 27. I'm working my way through each of them. I changed the example below to this:

Before: The alarm on Elliott’s cell phone beeped, waking him from a night of unsettling dreams that he couldn’t remember, yet he felt weighted down by them.

After: The alarm on Elliott’s cell phone beeped, waking him from a night of unsettling dreams. Images and emotions were beyond his grasp, yet he felt weighted down by them. 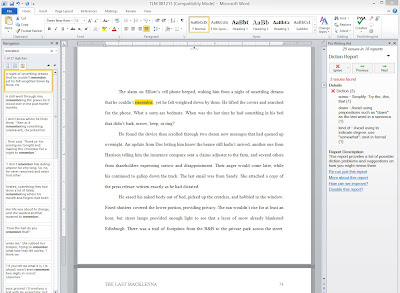