DAY 2 OF MY UK ADVENTURE

Arrived about 1:00 a.m. EST. London was wide awake, but not me. Took a nap, ate a snack, ran a 5K. For a pre-race meal, I ate a BLT sandwich. Bacon should be a food group of its own. I was so tired that I didn’t realize I had taken my orthotics out of my Newtons to put into another pair or running shoes, so I ran without even the inserts that came with the shoes. Ran pretty well though. Not as fast as my 5K 4th of July race, but all-in-all, I was pleased. 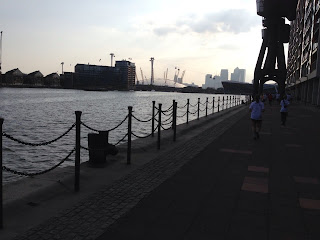 The out-and-back race course followed the Thames River. I ran with an embryologist from Perth. We had a great chat about the cost of IVF in Australia and the US. FYI: You can get through three cycles in Australia for the cost of one in the US. 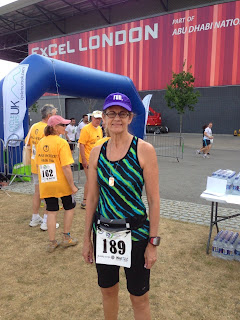 After the race and a shower, Ken and I ventured to Curzon Street for dinner where we found an eclectic group of restaurants. Decided on a pub and had fish and chips.

Walking down the narrow streets, past a cigar store that had been in operation since the early 19th century, I could hear horses and carriage wheels on the cobbled streets and felt as though I was living in a Regency romance novel.

Staying in a hotel that was formerly an elegant townhome, put me in mind of a Regency romance even more. I've read dozens of stories where the characters stayed in their London townhome. Ken asked me if I was okay, that I seemed distant. I tried to explain that my writer’s mind was in sponge mode—soaking up the sights and sounds.

This morning I was trying to figure out how to make coffee when I realized the pot only heated water. What? No coffee. I drank a cup of tea then ordered room service.

What’s on the schedule for today? Ken’s off to meetings, and I’m going on an exploratory run through Hyde Park. This afternoon we’ll start on our must-see-list.

I've learned one thing for sure. I’ll never again complain about the cost of taxis in NYC.

I’m off for another day of my UK Adventure

I’m always looking for great content to share. If you have a writing and/or marketing blog, or have a favorite that you visit often, please leave a link in the comment section. Thanks for stopping by.

The one thing you should never do in London, is even imply that you don't know where you're going to a taxi driver. If you do then you're in for a ride to eternity.

Hi Katherine,
I'd love for you to take a look at my blog; I post articles about writing and publishing. My latest post is How to Save Money on Editing by Preparing Your Manuscript http://wp.me/p2IvJd-uU. Thanks so much!