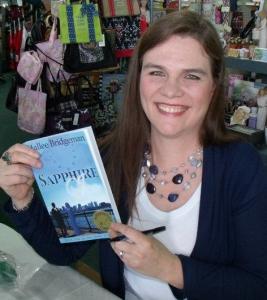 
Welcome, Hallee, and thanks for stopping by. Why don't you tell the readers a little bit about yourself?


I am married to Gregg. We have three children and live in the perfect small town in central Kentucky. I’m a full time writer, managing two blogs and writing novels. I love cooking, baking, entertaining, Doctor Who, and shopping – which really works out for me because my 15-year-old daughter could shop on a daily basis. I’m in the process of doing this 30-day blogging exercise so that people can get to know me a little better. One of the first things I had to do was list 15 interesting facts about myself.


Tell us about this Christian love story.


BLURB: To Robin Bartlett, men were nothing more than violent users. After a hair-raising childhood, Robin and her two younger half sisters battled simply to survive. Determined to give her sisters a very different life from that of their mother; to never have to rely on a man for anything, she worked two jobs and put them both through college, while accepting help from no one. Her heart had turned to ice and she had no use for men or God.


Antonio “Tony” Viscolli had grown up on the streets, homeless. At seventeen, he entered a downtown church with the intent of casing it, but found himself on his knees at the altar. After being fostered by the youth minister, Tony followed God’s leading and eventually became a very successful and powerful businessman. In a fallen world, he was a gem.


When Tony bought the restaurant where Robin bartended, she immediately resented his intrusion into her well ordered, but exhausting, life. She suspected his offering her special attention and constant kindness was merely his way of expecting something from her in return, something she wasn’t willing to give.


What is your personal, most effective way to get past writer’s block?  If I do a mindless chore -- something like mopping -- it frees my mind up to wander.  I do a lot of my plotting and writing while mopping!


What inspired you to start writing, or did you always want to write?  In 1999, my boss gave me a computer.  I'd never had one before.  About a week after I hooked that thing up at my house, I started writing.  Six weeks later, I finished my first novel.  It was the first time I even thought I wanted to write - I'd never considered it until I actually started.


How did you determine whether to self-publish or seek a traditional publisher?  My books are on the "edgy" side of Christian fiction.  But, they're incredibly evangelical.  They're too edgy for the Christian market, and too Christian for the secular market.  Self publishing was the best choice for me.


What made you take the plunge and finally do it?  God's timing is always perfect.  I believe I published on His time.


Do you have your plotline and character development already laid out before you begin writing a book, or do they develop as you write?  I plot as I write.  Sometimes I have an idea of where I want to go, and sometimes there's a specific scene I'm trying to get to, but not always.


What is your preferred method of writing? (computer, pen & paper, etc.)  I've tried to write with a pen and paper, but my mind works too fast.  I type about 110 words per minute, and still have a hard time keeping up with my thoughts while writing.


Who do you envision your typical reader to be?  Young Christian wives and mothers.

Do you write your books for your own enjoyment or more for what you think people would want to read?  I write the stories in my head.  I hope people get something out of them -- either a few hours of enjoyment, an inspiration, encouragement -- whatever they need when they sit down with the book.

Excellent article Hallee. I already have the book and will leave you a review when I'm finished with it.
Teresa R.