There aren’t enough adjectives to describe March 31, 2012. Christmas, birthday, 4th of July all wrapped into one day.

I got up at 4:30 and found an email from Lee at Ironhorse Formatting, which included the Smashwords, Kindle, and PDF versions of my book. “Whew,” he said. “That’s a thick book.”
I knew Smashwords would go online immediately so I took what little time I had and uploaded the manuscript. Then I cried, but it was a good kind of cry. I quietly said goodbye then got ready to leave for the race.  I had a cup of coffee and oatmeal, showered, and by golly, I curled my hair (then put it up in a ponytail), put on makeup and jewelry. This was a big day, and I wanted to look my best.
I arrived at Keeneland and found several friends, including Katie Cleveland, my running buddy for the day. At 7:30, my friend Connie Lester called to tell me she was stuck in traffic. We decided to pray over the phone instead of risk missing each other. I cried for the second time. Another good kind of cry.
At 7:45 we lined up for the start. Ken sent me a text asking where I was. I got out of line and found him for a kiss and a hug, gave him my jacket and earrings, then got back into place.

The weather was great, I started strong and quickly settled down to a good pace. At mile 3, I told Katie we had 10 more to go. We had run 10 during training runs so we knew we had it in us to finish the race. Weird logic, I know, but it seemed to work.
At the mile 4 hydration station, I had my first of 3 energy gels.

I hit mile 6 and turned on to Old Frankfort Pike knowing the real challenge would be the next 2 miles. The hills were big and never-ending. My daughter called at mile 6.5. Running time at that point was 1:35.

“You’re halfway, Mom," my daughter said. "You can do this.” ﻿﻿
Miles 7 and 8 were tough and I felt pressure in my hip. Nothing bad, but the hills were hard on my body. I finally left Old Frankfort. Whew! What a run.
I knew the hill at mile 10 would be difficult. I walked every bit of it. It was like climbing the steps of a 15-story building. That might be under-estimating the climb. I came out of it with a big smile for the photographer!
At the mile 11 hydration station I got a hug and a dose of encouragement, took an Advil, then headed on for the last two miles.
I had expected to be dragging at the end, but I wasn’t. My Sweetie met me with a kiss at the turn before the final stretch to the finish line. Then I saw my running buddy Rick Sebree. He’d already finished the race, but ran with me to just short of the finish line.
My sister Mimi, her husband Ned, my brother Bob and his daughter Taylor, and my friends John, Donna, and Connie were waiting for me all wearing their Team Kathy t-shirts. Awesome! I was #1436 to finish the race at 3:15:14. To have been running for only 6 months, I was pleased, and I hit my goal of 3:15.
A woman put a medal around my neck and I grabbed a bottle of chocolate milk. The moment seemed surreal. Even as a writer, I find it difficult to describe. I wish I could cross the finish line again and put the moment on pause so I could take in everything around me - the sights and sounds and smells, the beating of my heart, the incredible sense of accomplishment. In four hours, I had published the book of my heart that I had worked on since October, 1997, and I ran a half-marathon. 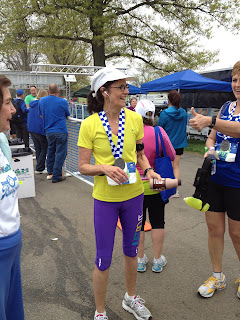 I capped off the race with 2 Bloody Marys and a cheeseburger. After a shower and a nap, I draped my medal on the side of my monitor and went to work. If there’s one thing I learned as a paralegal, it’s that you only get to enjoy successes for a short time, then you get back to work, and the real work is ahead of me. I have a full marathon to train for and a second book to finish and release within the next six months. And, of course, the biggest challenge of all, marketing! What good is it to write a book if no one reads it!
What a ride! The Lord Jesus was with me every step I took. Without His power and grace, I couldn’t have even crossed the starting line. God is awesome. He is awesome indeed.
Happy writing and running, Kathy

Fantastic post, Kathy. You made running sound fun! Congrats on the race and the book release!

Laura, it is fun. Crazy at that sounds, it truly is. Somedays I run with my hand lifted, celebrating and thanking God for giving me this passion and desire to be the best version of the person He created me to be.