POETIC WORDCLOUDS: THESE ARE THE MOST COMMON WORDS IN POETRY

By: Joanne Jeffries and Julian Yanover

Have you ever wondered what some of the most common words used in poetry are? Of course, some poets are known for writing about certain themes, but are there any surprising words that feature throughout? And, just how have these words changed over time? Are there any glaring differences when comparing classic poems with contemporary poems submitted through our community platform? This is what we sought to find out at My Poetic Side. We analyzed our entire database, which contains more than 35,000 poems, to discover the most common words in poetry, not only generally but in relation to some of the most famous poets as well. In the process, we created fun sliding images for 9 of the most important authors + a final general comparison. We only applied a few stop words which were filtered out before processing data, such as “a”, “the”, “and”, “of” and “to”, that would have skewed results. Also, we gave a little boost in the algorithm to words included in titles because of their importance.

Read on to discover what we found. And make sure to place your mouse pointer over the images to reveal the authors pictures and their favorite words, or alternatively if you are on your mobile, click inside the images.

As a highly respected spokesperson for Black people and women, it is hardly surprising that one of Maya Angelou’s most used word was ‘rise’. Her poems have been called the anthems of African Americans. This is evident from words such as ‘history’, ‘pain’, ‘caged’, and ‘fear’, as well as empowering words, such as ‘stand’, ‘free’ and ‘courage’. The heavy use of ‘river’, ‘bird’, ‘sings’, and ‘sun’ can also be viewed as symbols of freedom. Her poem ‘Caged Bird’ is one of the most well known, telling the story of a free bird that leaps on the wind’s back and floats downstream. Aside from racism, discrimination and equality, other common themes included identity, struggle, music, painful loss, love and family. It is thus of little wonder that the words ‘children’, ‘work’, ‘love’, ‘men’, and ‘woman’ are frequently used in her poems.

Robert Frost is highly regarded for his command of American colloquial speech and his realistic depictions of rural life. Consequently, it comes of little surprise that some of his most commonly used words relating to nature and outdoor life, including ‘tree’, ‘trees’, ‘flowers’, ‘wind’, ‘leaves’, ‘birds’, and ‘wood’. What is perhaps more curious is the element of nostalgia and reflection on the past that seems to be very prominent through the use of ‘had’, ‘back’, ‘dead’, and ‘thought’. The words ‘go’, ‘nothing’, ‘away’, and ‘death’ speak of the theme of isolation, which was common throughout a lot of Robert Frost’s poems. The two most frequently used words in Frost’s poems are ‘had’ and ‘him’, and while the former can be related to the theme of isolation, it could simply be more straightforward than this. His poems always dealt with man in relation with the universe. This is the perspective they came from, which is no doubt why those words were so prominent.
Emily Dickinson

If you missed my latest writing and marketing tweets, here they are again:
Happy writing and running, Kathy

Here's a wordcloud from the first chapter of my work-in-progress: The Three Brooches, due out late this summer... 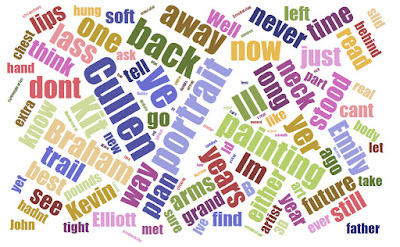