THE FATAL FLAW IN WEAK DESCRIPTIONS

When James Michener wrote Alaska, he spent the opening chapters describing the geological formation of the North American continent, and readers “watched” the gradual emergence of the Alaskan terrain—at just about the speed of those glaciers moving across the earth’s surface.

That style—broad, distant, and comprehensive—followed a long line of novelists from Defoe to Hugo into the last century. But like most aspects of novel writing, description has grown sharper over time.

More than any other element of fiction writing, description creates immersion. It’s important to get this one right.

In modern writing at least, description is best understood as a function of point of view. It needs to be personal. Another way to say this might be “description must reveal character.”

A common pitfall in visual description is a laundry list of physical characteristics, ticking every box, so to speak. But it’s hard to pick out important details from a multitude of unimportant ones—and readers will fill in a lot of gaps themselves, so much so that they can find it annoying to have every feature of someone’s face spelled out for them.

(Personally, I never could picture noses the way nineteenth-century writers tried to describe them. In my mind’s eye everyone just ended up with a nose disproportionately affixed to their face.)

The key with visual description, then, is to give just a few details—but run those details through the “reveal character” filter. 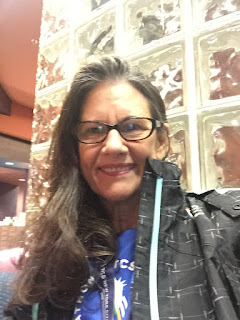 Last Thursday, I showed up at the Lexington Surgery Center, decked out in my New York City Marathon gear, for toe surgery. A year ago, I had the joint in the left big toe fused and now my right toe. I’ll be in a non-walking boot for five more weeks and then a walking boot for six weeks. No running until February.

Are these running injuries? No. Just years of wearing heels and a little bit of heredity. What cartilage was left, though, I did run off!

Since July, I have travelled to Europe, spent eight weeks in New York, finished a 150,000 word novel, and run a marathon. I was physically and mentally exhausted. Now, I have no choice but to rest. 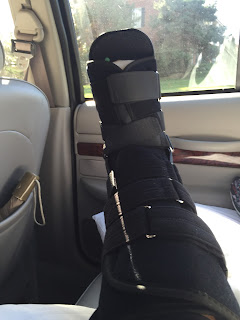 Yesterday, I spent the entire day binging on the HBO show ‘Newsroom.’ I can’t remember ever spending a day watching TV. Taking a break is good for mental health, but like vacations, breaks have to end.

I’ve been plotting two new stories. One a novella and the other ‘The Diamond Brooch.’ The novella, ‘The Montgomery Winery Murder’ will introduce two new characters that will become part of Elliott’s inner circle and will join Jack Mallory on his adventure to New York City in 1909.

A reviewer mentioned that my last two books were about wars, and she wondered if I was going to write about the Korean War or Vietnam next. No, I’m skipping those and researching the gilded age—a period of glittering on the surface and corruption underneath. I can’t wait to jump into the research.