More pictures from my research trip to Normandy:

I’ve included speeches from President Clinton and President Reagan. Their words express so eloquently the emotion I experienced in Normandy. Listen to Barber Adagio for Strings while you read.

esident Clinton's speech at thermandy Cemetery in the village of Colleville-sur- on June 6, 1994. 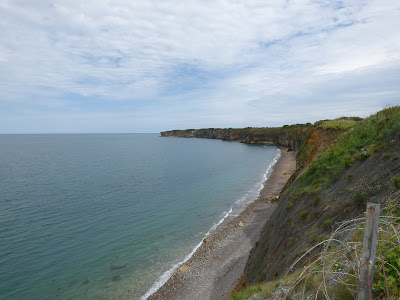 Today, the beaches of Normandy are calm. If you walk these shores on a summer’s day, all you might hear is the laughter of children playing in the sand, or the cry of seagulls overhead, or perhaps the ringing of a distant church bell—the simple sounds of freedom barely breaking the silence—peaceful silence, ordinary silence.

But on June 6, 1944 was the last ordinary day of the 20 Century. On that chilled dawn, these beaches echoed with the sounds of staccato gunfire, the roar of aircraft, the thunder of bombardment. And through the wind and the waves came the soldiers, out of their landing craft and into the water, away from their youth and toward a savage place many of them would sadly never leave. 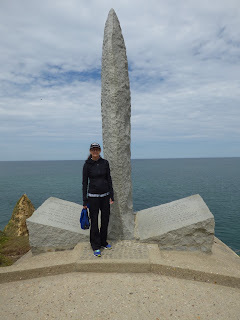 We're here to mark that day in history when the Allied peoples joined in battle to reclaim this continent to liberty. For four long years, much of Europe had been under a terrible shadow. Free nations had fallen, Jews cried out in the camps, millions cried out for liberation. Europe was enslaved, and the world prayed for its rescue. Here in Normandy the rescue began. Here the Allies stood and fought against tyranny in a giant undertaking unparalleled in human history.

We stand on a lonely, windswept point on the northern shore of France. The air is soft, but forty years ago at this moment, the air was dense with smoke and the cries of men, and the air was filled with the crack of rifle fire and the roar of cannon. At dawn, on the morning of the 6th of June 1944, 225 Rangers jumped off the British landing craft and ran to the bottom of these cliffs. Their mission was one of the most difficult and daring of the invasion: to climb these sheer and desolate cliffs and take out the enemy guns. The Allies had been told that some of the mightiest of these guns were here and they would be trained on the beaches to stop the Allied advance. 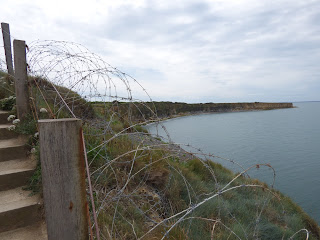 The Rangers looked up and saw the enemy soldiers -- at the edge of the cliffs shooting down at them with machine-guns and throwing grenades. And the American Rangers began to climb. They shot rope ladders over the face of these cliffs and began to pull themselves up. When one Ranger fell, another would take his place. When one rope was cut, a Ranger would grab another and begin his climb again. They climbed, shot back, and held their footing. Soon, one by one, the Rangers pulled themselves over the top, and in seizing the firm land at the top of these cliffs, they began to seize back the continent of Europe. Two hundred and twenty-five came here. After two days of fighting only ninety could still bear arms. 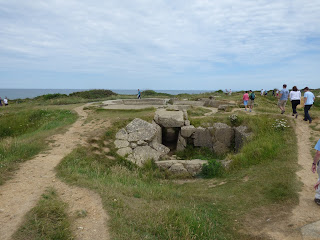 Behind me is a memorial that symbolizes the Ranger daggers that were thrust into the top of these cliffs. And before me are the men who put them there.

Gentlemen, I look at you and I think of the words of Stephen Spender's poem. You are men who in your 'lives fought for lifeand left the vivid air signed with your honor'...

Forty summers have passed since the battle that you fought here. You were young the day you took these cliffs; some of you were hardly more than boys, with the deepest joys of life before you. Yet you risked everything here. Why? Why did you do it? What impelled you to put aside the instinct for self-preservation and risk your lives to take these cliffs? What inspired all the men of the armies that met here? We look at you, and somehow we know the answer. It was faith, and belief; it was loyalty and love.

The men of Normandy had faith that what they were doing was right, faith that they fought for all humanity, faith that a just God would grant them mercy on this beachhead or on the next. It was the deep knowledge -- and pray God we have not lost it -- that there is a profound moral difference between the use of force for liberation and the use of force for conquest. You were here to liberate, not to conquer, and so you and those others did not doubt your cause. And you were right not to doubt. 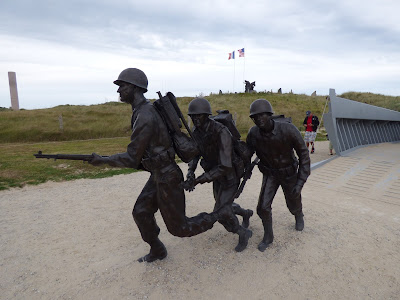