Links to Writing & Marketing Blog Posts PLUS My Adventure in Edinburgh

My work-in-progress is titled The Last MacKlenna. It’s a romantic suspense that picks up where The Ruby Brooch ends and tells Elliott Fraser’s story.

Elliott, CEO of a Thoroughbred farm in Lexington, Kentucky, meets Meredith Montgomery, president of a winery in Napa, California, during the holidays at a B&B in Edinburgh. She’s visiting the city to do family genealogy research at the National Archives. She's also awaiting the results of a breast biopsy.

Elliott is on crutches recovering from surgery and dealing with news of the death of his prized Thoroughbred. I have a scene where he accompanies Meredith to the Archives and has to climb icy steps. I had searched Google Earth and had a sense of the scene, but it wasn’t until I was actually there last week, that I could feel how the scene played out. We visited on Saturday so the steps were locked off and I couldn't climb them, but in my mind, I could see Elliott hobbling up the stairs.

As a side note, Edinburgh was having a heat wave. Notice that I'm wearing a running jacket. The scene below takes place in December.

EXCERPT:
Meredith slung her bag over her shoulder. “There’s a lift on the other side of the building if you’d rather not take the stairs.” 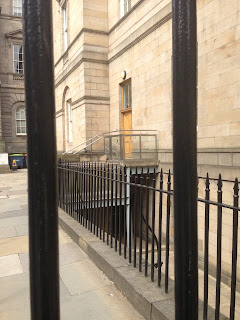 He judged the distance across the icy sidewalk to the lift, compared it to difficulty of negotiating two dozen wide steps, and made a quick decision. “Let’s take the stairs.”

At the bottom step, he blew out dread on a long breath. Making it to the first landing would be worse than pulling fingernails. He could get through it, but hiding his agony from Meredith would require an Oscar performance. If he rattled her, maybe she’d wouldn’t hover and notice his distress. He hobbled to the first step covered with fresh snow.

“Why do you still wear your wedding ring?” 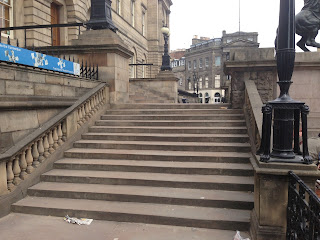 He managed a grin. “Hope to hell you don’t get yourself killed.”

“That’d put a damper on your dinner plans, wouldn’t it?” 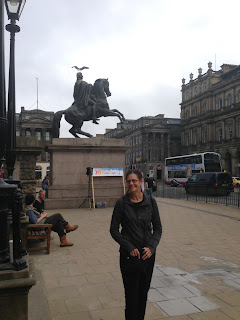 They reached the first landing without Meredith answering the question about her ring. Elliott stopped, readjusted his grip, and fixed his eyes on a bronze statue of mounted on a rearing horse. His thoughts went to Galahad.

“I took it off once,” she said, “but I felt like I was running naked.”

Running naked? Her comment jolted him back to his question. “So you’re one of those OCD runners who incessantly check their Garmin?” He’d never worn one, enjoying the freedom of running without being tethered to a watch or smart phone. But he’d always mapped his run afterwards to check the mileage and log the run in his notebook.

“I know it’s good training to run without a watch, trusting your instincts and listening to your body, but it drives me nuts when I don’t wear it. That’s the way it was without the ring. I put it back on.”

“If you’re wearing a wedding ring so you won’t feel naked, won’t any ring work?”

“Another ring wouldn’t stop men from hitting on me.” She bit down on her bottom lip and averted her eyes.

Her obvious embarrassment at exposing herself so easily gave him smug satisfaction. “How’s that working for ye’, m’lovely?” He placed his finger under her chin and turned her head toward him.

She tempered her glare with a slight smile. “Not so good.”

Being in Edinburgh where the first 100 pages of the story take place was an absolute delight. Being back in Lexington where the remaining 400 pages take place is a delight, too. After five days, I think I’m finally recovering from a fantastic adventure.

If you missed my writing & marketing tweets and retweets yesterday, here they are again:
I’m always looking for great content to share. If you have a writing and/or marketing blog, or have a favorite that you visit often, please leave a link in the comment section. Thanks for stopping by.