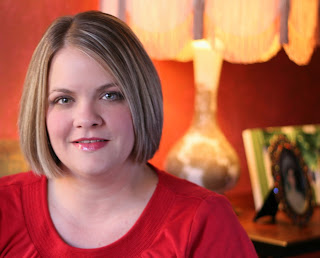 Amy is a member of Kentucky Independent Writers. She lives in Kentucky, where she is a middle school teacher.  She and her husband of 16 years are raising three wild, intelligent, and creative boys, giving her plenty of fodder for the love and adventure she enjoys putting in her stories!

What’s the title?
ONCE AND FOR ALL

What genre does your book fall under?
It’s a Young Adult Paranormal Romance.

Where did the idea come from for the book?
ONCE AND FOR ALL is book 2 in my Sky Cove Series. Book 1 is titled ONCE AGAIN. The series is set in a fictional, coastal Maine town, where the phenomenon of reincarnation snares high school students in its mystery and danger! When the idea for this series came to me, what really “drew me in” was the idea of love being timeless… spanning generations… surviving death and tragedy. 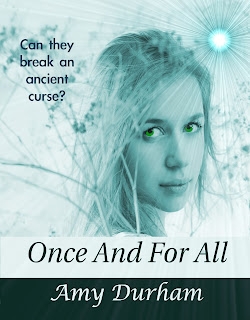 What actors would you choose to play the part of your characters in a movie rendition?
I love Teresa Palmer, and I think she’d make a lovely Phoebe Campbell. Palmer played Becky Barnes in “The Sorcerer’s Apprentice”, Number 6 in “I Am Number Four”. She’s also in the new Zombie movie, “Warm Bodies”.  Todd Miller’s character is harder for me to envision, partly because I love him so much! But perhaps Alex Pettyfer, who played John in “I Am Number Four”. But, he’d have to have darker hair!

What is the one-sentence synopsis of your book?
Well… the tagline on the book cover reads, “Can they break an ancient curse?”
But I prefer the two sentence synopsis… “What happens when 180 pounds of football star collides with 105 pounds of art geek? An ancient curse springs to life, of course.”  I like this one because on the first page of the book, the characters DO literally collide!

Is your book self-published? If so, what do you like about being a self-published author?
Yes, my book is self-published. I like that I’m independently published because it allows me to be in the driver’s seat of my writing career. I own the rights – both digital and print – my books, and make a higher royalty on my sales. Being traditionally published (through a publishing houses) has its benefits, for sure, for those authors that are able to secure a contract. But being independently published means that my books aren’t taking up space on my hard drive, getting older and less culturally relevant while I wait for an agent or a publisher.

How long did it take you to write the first draft of the manuscript?
Writing ONCE AND FOR ALL took about nine months. However, those nine months weren’t consecutive. I worked on it for about three months, then moved away from it for a time to write something else. Later I came back and spent about six months finishing the book.

What other books would you compare this story to within your genre?
I wanted to explore the idea of “class jumping” in high school. Thinking back on my own high school days, I remembered clearly what a scandal it was when a “popular” boy dated a girl from a class or two below him. It was difficult for both of them, and the both suffered through the stares and “colorful” comments from fellow students. I wanted to write two characters who feared the ramifications of this situation, and ultimately decided their love was worth it.

Who or what inspired you to write this book?
No one specific person or thing inspired this book. Although, I did think a lot about my oldest son during the “finishing up” phase. He’s in high school now, and has dealt with a lot of the social difficulties that kids that age do. It’s so tempting to try and change yourself to suit those around you, so that you can escape the criticism and ridicule that adolescents are so good at dolling out. I always want him to know that he’s “enough” exactly as he is, and that what people say to him or about him doesn’t affect the person that he is on the inside.

What else about the book might pique the reader's interest?
One of the major plot-points in the book is a joint art project that Phoebe and Todd have to complete. She’s the star art student, and as far as she’s concerned, he’s only in the class because he thinks it’ll be an “easy A”. She’s wrong though, and Todd’s presence in art class is his first attempt at breaking away from his “old self”. Their project is a sculpture made of various wood-carvings mounted together. Since I know NOTHING about carving, I enlisted the help of my good friend Cayce, who is the art teacher at my school. I’m still no expert on wood-carving, but I learned a bit of interesting stuff along the way. Perhaps readers will also take away some artistic knowledge that they didn’t have before!


I’m always looking for great content to share. If you have a writing and/or marketing blog, or have a favorite that you visit often, please leave a link in the comment section. Thanks for stopping by.