And the day came when the risk to remain tight in a bud
was more painful than the risk it took to blossom.
~Anaïs Nin

Can a 21st century paramedic find her heart's desire on the other side of time? 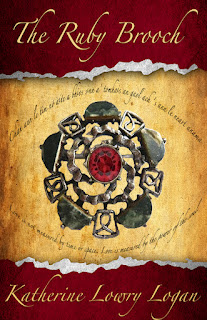 From the white-plank fenced pastures of Lexington, Kentucky, to the beautiful Bay of San Francisco, The Ruby Brooch, a saga steeped in family tradition and mystery, follows a young woman's journey as she searches for the truth on the other side of the heather-scented mist.


As the lone survivor of a car crash that killed her parents, paramedic Kit MacKlenna makes a startling discovery that further alters her life. A faded letter and a well-worn journal reveal that she was abandoned as a baby and the only clues to her identity are a blood-splattered shawl, a locket that bears a portrait of a nineteenth-century man, and a Celtic brooch with mystical powers.


After studying the journal, she decides to continue her father's twenty-year search for her identity and solve her birth parents' murders. For safety reasons, she adopts the persona of the Widow MacKlenna. Although a perfect cover for her eccentric behavior, she will be forced to lie and MacKlennas don't lie, or so she thought. Finally, dressed and packed, she utters the incantation inscribed on the ancient stone and is swept back to Independence, Missouri, in the year 1852.


Upon arriving in the past, she meets Cullen Montgomery, an egotistical Scotsman with a penchant for seducing widows. The San Francisco-bound lawyer happens to resemble the ghost who has haunted Kit since childhood. She quickly finds the Bach-humming, Shakespeare-quoting man to be over-bearing and his intolerance for liars threatens her quest.


If she can survive his accusations and resist his tempting embrace for seventy-three days, she might be able to find the answers she seeks, and return home to a new life without changing history or leaving her heart on the other side of time.

Listen to an excerpt from Chapter Two.
This is the first meeting between Cullen Montgomery and Kit MacKlenna

BIO: Katherine was born the second of five children to a Presbyterian Pastor and a stay-at-home mom. She came of age in Louisville, Kentucky, during the tumultuous 1960s. Sit-in's, bra burnings, the sexual revolution, pot, campus unrest, and the Vietnam War were brought vividly to life by Walter Cronkite on the CBS Evening News. While the rest of the world seemed to spin out of control, Katherine spun stories in her head.

College, marriage, and two daughters kept the muse simmering on the back burner. She worked as a real estate and tax paralegal in a law firm in central Kentucky, and was actively involved in the life of her community.

It wasn't until the nest was empty that she sat down to write full-time. Life, as it often does, brought tragedy and a screeching halt to her writing. Her husband, best friend, and lover died unexpectedly. Healing was a slow process, but two weddings and five grandchildren have a way of putting life into perspective. Following the birth of her second grandchild, she found her writer's voice again.

Katherine lives in Lexington, Kentucky and is blessed with a wonderful and supportive family and circle of friends. They have encouraged her and celebrated each and every step of her journey.
Posted by Unknown at 7/06/2012 08:28:00 AM