In the print version, chapter 31 begins on page 238 of 380 pages with 53 chapters, a prologue, and epilogue.  On Wednesday, May 23, for one day only, the book will be available as a free download on Amazon. 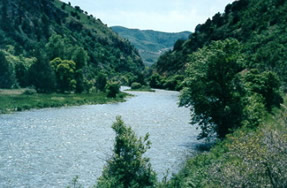 BRAHAM WALKED ALONG the bank of the Bear River at the Hudspeth Cutoff at a slow, uneasy pace. The wind sighed through the trees and underbrush carrying the scent of pine. Dark thoughts swirled in his mind and mirrored the gloomy overcast evening that limited visibility to shadowy outlines of the opposite bank and the rugged land beyond. A damp chill cooled the air. By morning, the weight of icy dewdrops would bend the grass—but not his decision. He would be gone by then, following the gossamer stillness across the desert to California.


His farewell supper had lasted through two desserts while Kit sang his favorite songs: Meet Me by Moonlight and Do You Think I Can Forget. Her voice, tuned to musical perfection, whispered over his skin like a sultry breeze, and he had squirmed in his chair like a sinner in church.


He tossed his last rock into the river, and it skipped twice before it sank. Plop. Nothing he did assuaged his guilt or silenced its incessant chatter.


Do not leave your friends. Do not.


He let out a long, deflated breath. Who would protect them once he was gone? Cullen would protect Kit, but who would protect Cullen? The killers posed a threat to everyone on the trail. If the wagon train met up with them, Cullen and Henry would need his gun.


An irritating tingle stole over him. Maybe he should stay with the wagon train until it reached Oregon. Damn. For someone who prided himself on his decision-making skills, he’d done a lousy job on this trip.


He considered his commitments. A conflict grew inside him like an intense and powerful heat. He had promised Mr. Phillips he would be in San Francisco by mid-July, and he had promised Cullen he would offer condolences to Phillips. Braham didn’t want to leave. He pounded his fist into his palm. Should an injury befall either Kit or Cullen, or God forbid, one of them be killed, he would never forgive himself.


Braham’s preternatural hearing picked up sounds of nocturnal animals rustling in the foliage and footsteps passing gingerly through the grass. He pivoted toward the approaching sound. His hand hovered over his holster, and his eyes grew wide and alert. Then at the sight of golden hair glimmering in a tiny sliver of moonlight, his trigger finger relaxed.


Kit paused in the near darkness. “Only a few weeks ago you were trying to solve the problem of world hunger. You must have found a solution and moved on to the next problem on your list.”


“Not since dinner, but I’ll help you find him.”


She pulled her shawl tightly around her shoulders and looped the fringed ends through her apron strings. “I brought you a gift.”


“I want to give you one anyway. But you have to choose.”


He rested his thumb under his chin and poked at his upper lip with his index finger. “Michael Abraham McCabe doesn’t need to glance into the future. However, seeing far in the present would be an advantage.”


She sucked in a long breath between her teeth. “I…I didn’t mean to say that.”


She handed him a pair of binoculars.


He lifted them to his eyes. “To see far into the present?” His tone was a mixture of appreciation and curiosity. “What’s the gift for the future?”


Braham noted a flash of nervousness in her hesitation.


“American History From 1776 Through the Inauguration of the Forty-fourth President.”


“Does it mention a Major McCabe?”


“You said you didn’t want to see into the future.”


“I’ve reconsidered.” While inspecting the binoculars he watched her from the corner of his eye. She wore a puzzled expression that reminded him of his grandmother McCabe.


“Did Cullen tell you I’m pregnant?”


Twigs snapped to the left. “Not yet,” Cullen said, striding down the path toward them. “John said you were looking for me.”


She brought her forearm up in front of face as if reading the time on the special watch Braham had seen on her wrist before. “Um…an hour ago.”


Cullen kissed her. “Adam and I were discussing—”


“Let me guess.” She tapped her toe. “He’s into the comedies this week. Tempest? No. Twelth Night? No, that’s not it. Much Ado about Nothing.”


Cullen chuckled. “You, my lass, have become a Shakespeare devotee. I’d say you know exactly what he’s reading because you finished Much Ado about Nothing last week and encouraged him to read it next.”


“Do you know all my secrets?”


Cullen whispered into her ear. There wasn’t enough light for Braham to see well, but he believed she blushed. He felt a lump rise in his throat. His friend was a lucky man. He had an intelligent, beautiful woman to love and a baby on the way. He didn’t want to begrudge Cullen’s blessings, but down deep, he did.


“If you’re through jabbering about Shakespeare, I believe you mentioned something about a baby. I’ll accept the role of cousin, uncle, or godfather.”


“Uncle Braham?” Cullen laughed with an ease Braham hadn’t heard in his friend’s voice for a very long time. “Consider yourself asked.” He retrieved the book from Kit’s hand. “Braham didn’t want this?”


He snatched the book from Cullen. “If this mentions me, I do want it.”


“I didn’t say you were in the book.” Kit tried to grab it, but Braham held the book over his head. She jumped, laughing, caught in a game of keep-away.


Cullen placed his hands around her waist. “Settle down, lass, and tell me why he believes he’s in your history book?”


She grabbed Braham’s arm and tugged on it. “I called him Major McCabe.”


Cullen grabbed the book and gave it to Kit. “Who’s Major McCabe?”


“The lawyer from Illinois? What’s he President of?”


Braham pulled two cigars out of his pocket, offered one to Cullen. He declined. “Will I be a major in the cavalry?”


“Of course it matters. Who wants to be in the infantry?”


“You really want me to tell you?”


Braham thought a moment. What harm could it do? “Yes.”


“According to historical resources, Major Michael Abraham McCabe served in the United States Cavalry on special assignment to President Lincoln from 1863 to 1865.”


“Why will the President need a special agent?” Cullen asked.


Braham lit his cigar. “That sounds like a fair question.”


Kit fanned the smoke. “I’ve already told you more than you wanted to know.”


“If Braham wants the information, tell him,” Cullen said.


“If I give you a picture of the man in the portrait will you try to find him?” she asked.


“If you’ll tell me why I’m assigned to the President.”


She elbowed him in the gut.


Her fingers flittered against her chin, and her eyes glanced upward. “A war starts in 1861, and no one knows for sure how or why you become involved. You live in California when it starts. Historians say it’s because of an old relationship with General Sherman. Others say it’s your northern sympathies.”


He’d never met Sherman, although Cullen had mentioned him, and Braham didn’t think he had particularly northern or southern sympathies. “How do you know?”


“The MacKlennas have a chess set that was made in the late 1860s. All the pieces are Civil War generals, except for one black knight—Major Michael Abraham McCabe. The chest set is one-of-a-kind. There’s no legend, no story, no family history, no information as to why the black knight is included. ”


“Why didn’t you mention this before?” Cullen asked.