As I reviewed my training schedule for the week, I noticed the condition of the two sheets of paper, crinkled and marked with notes. I shook my head, amazed that I had survived sixteen weeks of training. The notes that peppered the schedule said things like: sick, fell, injured, recovering, KYRW workshop, stomach cramps, allergies.

In total, I missed eight training days, but I never thought of quitting, not even when my toes were freezing during runs in January. Why didn’t I quit the insanity? Why was I running 6, 7, 8 miles in 20 degree temperatures when I couldn’t see through fogged up glasses? Why didn’t I quit?

Because quitting simply wasn’t an option. Crossing the finish line was my goal—my dream. Without training, without putting in the work, without sacrifice, I’d never achieve what I set out to do. 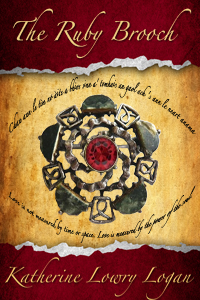 The heroine in THE RUBY BROOCH goes back in time to travel the Oregon Trail in 1852 in search of her birth parents and her identity. As a pioneer re-enactor, she knew she’d face obstacles on the trail that would test her emotionally and challenge her physically. But her quest was something she had to do.  Not doing it was never an option.
Fortunately for Kit, she found buddies to travel with that made the journey easier. Fortunately for me, I found buddies that have made my journey easier, too. Without them, neither one of us would have gotten where we were going.
The following is an excerpt from THE RUBY BROOCH. Kit and the wagon train are leaving Independence, Missouri for the six-month trip to Oregon. In this scene, she and Cullen, the hero, meet at the top of a bluff overlooking the departing wagons.
Dreams. We all have them. We all chase them. How often do we achieve them?
####
NOT FAR FROM town, Kit found a bluff overlooking the trail. A breeze rustled the underbrush along the switchback she followed to the top. A twig snapped. A tree fluttered its budding branches. A bird sang. Nature’s quiet symphony.
Turn down the volume on the silence.
If that wasn’t a song, it should be. At least it wasn’t the eerie silence she’d heard the night Scott died in her arms. No other sound in all of creation compared to the last whisper of breath. A shiver rolled up the length of her body. She shifted in the saddle. If she fell into an emotional quagmire on her first full day living in 1852, she might as well quit and go home because she’d be of no use to anyone.
She stiffened her spine and focused on the scene unfolding below her.
The wagons' white bonnets shimmered in the morning sun, and the wind, blowing across the long grass, created an illusion of schooners sailing over the ocean. The view made her drawing fingers itch. She grabbed her pencils and journal from the saddlebag and within moments became lost in her work.
“If a man’s dream could be painted, you’re looking at a masterpiece.” ﻿﻿
Adrenalin exploded in her body. The journal and pencils flew from her hands. She jerked around to find Cullen reining his horse alongside her. “Damn, you scared me.” ﻿
His expression changed from surprise to smoky in a single heartbeat. “You shouldn’t be up here by yourself.” He dismounted, slow and easy. “It’s not safe.” He picked up the journal and pencils and glanced quickly at the drawing before handing her the notebook.
“I appreciate your concern, but—”
“—You can take care of yourself.”
“Exactly.”

A flock of honking geese, flying in V formation, pulled their gazes toward the sky.

Cullen puffed, and wisps of smoke formed a halo around his head. “There’re lessons to learn from geese.”

“What? Fly high enough not to get shot?”

The corner of his lip twitched. “That’s one.”

They remained silent for a moment or two, then he said, “The flock works as a team. If a bird falls out of formation, he soon realizes he can’t fly by himself and gets back in line. If one gets sick and drops from the flock, two others fly with him to the ground and wait until he gets better or dies.”


She cocked her head, giving him a sideways glance. “Is that true?”
“The birds share a common goal, Mrs. MacKlenna, a common direction. And they’ll get where they’re going quicker than one bird could get there on its own.”
“I sense you’re not just talking about birds.”
He returned her gaze. The look in his dark blue eyes grew intense. Her heart beat faster than normal. The pencil in her shaking hand tapped lightly on the page. “What’d you say about dreams? If a man’s dreams could be painted . . .”
“You’re looking at a masterpiece.”
She wrote the word dream, then drew a faceless woman. “All those folks on the wagon train are filled with dreams, aren’t they?”
“Just like you and me.”
“I wonder how many will give up on theirs.”
He took a long, slow pull and blew out the smoke. “We’ve got close to a hundred strong-willed folks traveling with us. If they stay healthy, most will make it to Oregon. But some of their dreams will be shattered along the way.” He rolled the cigar between his fingers. “Don’t let one of them be yours.”
####
Happy writing and running, and may you achieve all your dreams, Kathy
Posted by Unknown at 3/26/2012 09:35:00 AM